The answer to both of these questions is yes, but you don’t have to be worried just yet.

Do Betta Fish Have Teeth?

If you look really closely into your betta mouth you’d see rows of small white teeth, especially on his bottom jaw. However, their teeth are tiny so you may have trouble seeing them unless you’re using a magnifying glass or the zoom feature on your phone.

Because of this, you shouldn’t worry if you can’t see them. Your betta does have them but they may be too small for you to see easily.

And yes, bettas teeth are incredibly sharp. But don’t worry too much about this (you’ll find out why soon enough).

What Do Bettas Use Their Teeth For?

There are a couple of different reasons a bettas teeth come in handy. First of all…

The vast majority of a bettas diet is meat (however, they will eat some vegetation if they get the chance, they’re incredibly gutty.)

Because of this, they need teeth to attack and kill their prey. In the wild, most of their diet would consist of small insects, so their teeth make it easier for them.

And it’s not just attacking them, but teeth also help them to chew up whatever they’ve managed to kill. You may even see your betta quickly chomping on betta pellets and other food in a similar way.

Bettas aren’t called Siamese fighting fish for no reason. Because they’re so aggressive they need their teeth to help them fight. Especially if there are other males in the vicinity. They use their sharp teeth to attack and rip apart their enemies tails, scales, and fins.

This is why you should never keep male Siamese fighting fish together, and in some cases, it means you can’t keep your betta with any other fish either. If he’s particularly aggressive he’ll attack anyone.

But as a rule of thumb, you shouldn’t keep your betta with any fish that is brightly colored or has a long flowing tail and fins.

Whether your betta bites you or not really depends on their temperament. Some bettas are really laid back or timid and won’t bother biting you if you put your hand in their tank. However, more aggressive bettas may see your hand as a threat and try to attack it.

And it may not just be your fingers he goes after, remember that a betta may bite anything that goes into his tank.

How Strong Is A Bettas Bite?

Pound for pound if you compared a bettas jaw power to other animals, it’s bite is stronger than a great white shark. This is impressive, until you realize, how small his mouth is. And while a betta can bite you, his mouth won’t even be strong enough to break the skin.

(Have you ever wondered how long your betta can live for?)

Does Being Bitten Hurt?

Because betta fish have such small teeth and mouths, being bitten isn’t going to hurt. As previously mentioned your skin is too strong to even be broken by a betta fish. What being bitten feels like depends on the person you ask.

If you want to know what a bettas bite feels like then you should put some food on the tip of your finger and then get your betta to bite it off. If he’s being gutty, he’ll normally bite your finger as well as the food. However, make sure you avoid doing this too often. Why Do Betta Fish Bite And Not Let Go?

You may notice that your betta has bitten you and won’t let go on occasion. If this is the case, then it’s not because he’s attacking you, but it’s because his jaw has gotten stuck.

This is one of the reasons you should try to avoid letting your betta bite you. If his jaw gets stuck and he can’t let go then he may end up damaging himself.

Why Do Bettas Bite People?

There are a number of different reasons your betta may end up biting you. And you should avoid most of them if you can, as they may stress your betta out.

The first reason your betta might bite you is because of curiosity. If he sees your hand looming into the tank he’s going to be curious about what’s going on. And because bettas don’t have hands like me and you, they need to use their mouths to grab things and figure out what they are.

A second reason your betta might bite you is out of defense. Imagine if you saw a giant hand coming towards you, you’d probably attack it as well. This is one of the things that’s going to stress your betta and why you should avoid sticking your hands into your tank.

And lastly, if you’re putting food on your finger to feed him then he may just bite your finger by accident. While they’re normally quite precise, if he’s hungry, he may get a little bit carried away.

Be Prepared To Be Bitten

If you’re going to stick your hand in your bettas tank then you should make sure you’re prepared to be bitten. If you don’t suspect the bite it may make you jump. And if you recoil too quickly with your betta still attached you may end up flinging him into the air.

Not only is this going to terrify him, but if he doesn’t land back in the water it could end up doing serious damage. 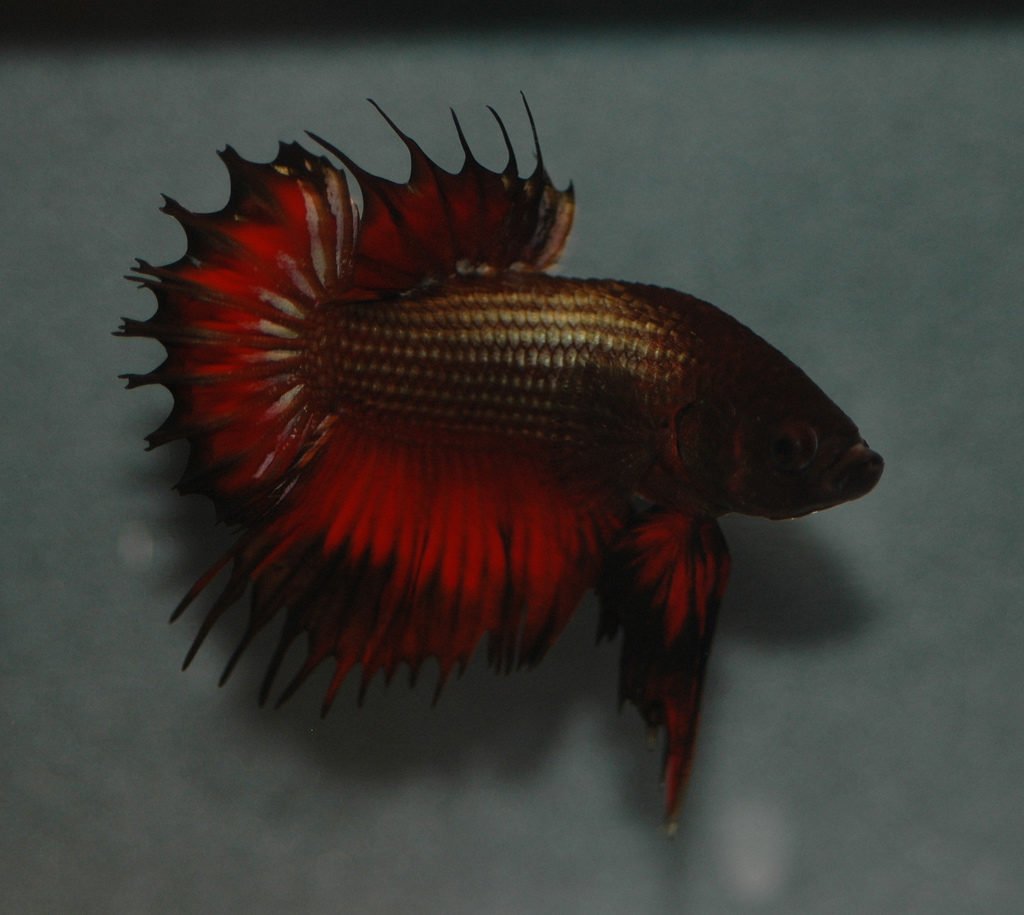 Unfortunately, bettas aren’t romantic fish, and it’s not uncommon for them to be aggressive towards each other even when they’re spawning. But depending on the type of bite it can be a good sign or a serious cause for concern.

Depending on how hard your betta bites it could be a good sign. If you notice one betta biting another (it could be male or female), but the other one only backs away a little bit or doesn’t move, then it’s a sign that one of them isn’t ready or isn’t quite sure, but they’re not opposed to mating.

Also, make sure this bite isn’t causing any damage. It should be a small nip not a full on bite.

However, even if bettas don’t bite at all it still means they may be interested in each other.

And sometimes the biting can be caused straight out of aggression. If you notice bites to the tail and fins then you may need to separate the bettas.

This is a sign that they’re not going to be good mates and they’re just being flat out aggressive towards each other. And remember, it’s not just males that are aggressive, the females can be aggressive too.

You can tell if it’s an aggressive bite depending on the reaction of the recipient. If they dart away and try to avoid the perpetrator then it’s not the good kind of bite.

If you do notice this sort of biting then you should wait a while before trying to breed your bettas again.

So Can Betta Fish Bite And Do They Have Teeth?

As you now know the answer to both of these questions is yes! Your betta fish can bite and he does have teeth. And here are a few things to remember:

2 thoughts on “Do Betta Fish Have Teeth And Can They Bite?”