The goldfish has been a staple household pet for decades. Unknown to many goldfish owners, their fishy friends share a lot more in common with them than they may think.

Yes, these cute little fish have their own set of teeth! Located in the back of their throats, these smooth, flat teeth fall out just like human teeth and are meant to help with feeding and digestion, as well as having an incredible regrowth rate. Harmless to us humans, these teeth still serve a purpose for our goldfish friends.

In this article, you’ll get all the information you’ll need about goldfish pearly whites. That way, you can dazzle your friends with your newfound goldish knowledge.

Do Goldfish Have Teeth?

To put it simply, yes, goldfish do have teeth. Although this might seem like some kind of practical joke at first, it is completely true! However, these are not the teeth we are used to, nor are they located where most people would expect them to be. These teeth are not designed for ripping, tearing, or biting either, like many of the animals most humans are used to. However, they are extremely important to the physiology of the goldfish and ensure that it lives a long and healthy life.

So you have no reason to worry next time you want to take a swim in a lake or river that might have some goldfish living in it. Although goldfish can grow to great sizes when left in an open environment, you have no chance of being on the menu anytime soon.

So Why Do Goldfish Need Teeth?

Many members of the Carp family, of which goldfish also belong, share this similarity in the dental structure. Since they are not predatory fish, their teeth never evolved beyond their intended purpose.

This grinding feature is handy when the goldfish attempts to eat more solid foods found in its home environment. Inside of a fishbowl, most goldfish will eat pellets, flakes, or diced vegetables such as lettuce and peas. In their natural environment, goldfish will consume insects such as larvae, zooplankton, and dead plant and animal matter. This dead plant and animal matter is known as detritus and makes up a very substantial amount of the wild goldfish’s diet. These pieces of food can be pretty large, so the teeth help grind it to fine amounts. Since larger foods can pose choking hazards, the teeth of the goldfish have ensured the survival of goldfish for a very long time. 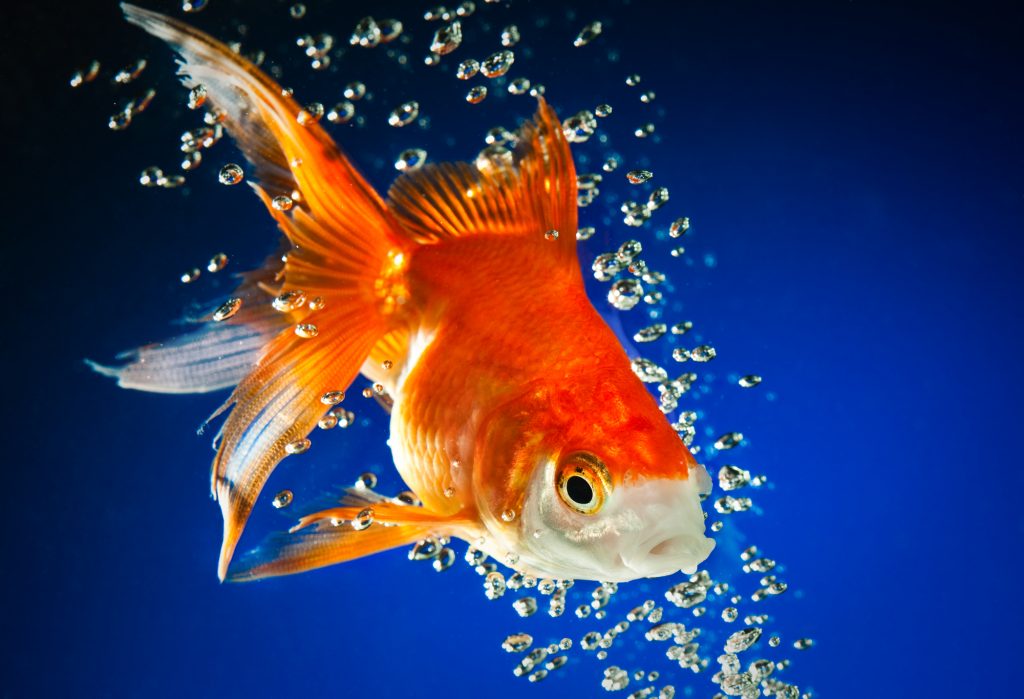 Where are Goldfish Teeth?

Finding goldfish teeth can seem like a lost cause at first.  You won’t find them smiling at you any time soon or taking high-quality photos. It also would not be a smart recommendation to go digging around in your goldfish’s mouth for these teeth, as they are hard to spot, not to mention it would be a very unpleasant experience for your pet.

Unlike normal teeth, goldfish teeth are not located right at the front of the mouth like the vast majority of the animal kingdom. Goldfish teeth are found further back, near the back of the throat. This area is known as the pharynx, a small portion of the goldfish’s body that connects its mouth to its esophagus. The vast majority of life on earth has a pharynx; you have a lot more in common with your goldfish than you might think!

These teeth are known as pharyngeal teeth, whose specific design is meant to grind up food into smaller particles for easier digestion. Click both links to find out more in-depth knowledge about pharyngeal teeth and fish digestion. Although this might seem odd for us humans, this is a common trait in many kinds of fish, more specifically, the Carp family. There is no need to worry; however, as we continue, you’ll find that these teeth don’t pose any kind of threat to you.

Do Goldfish Have Sharp Teeth?

Now that you know that goldfish have teeth, the idea of your favorite pet using them against you might be a bit startling, to say the least, but there is no need to fear. However, we still do not recommend you go around angering any goldfish, especially your own.

Since goldfish teeth are located near the back of the throat, the chances of them jumping out of the bowl to make a snack out of you are impossible. Daily feedings will also curve these snack cravings from your fishy friend as well.

Another detail to remember is that these teeth are not sharp in the slightest way. As previously discussed, they are designed for grinding, not shearing or tearing, to turn food into a paste to make it easier to digest. So if you find yourself probing your goldfish’s mouth for something, you won’t be losing a finger any day soon. Unless, of course, goldfish develop a taste for people. In that case, we might have to worry just a bit.

Do Goldfish Lose Their Teeth?

Most animals, including our friend the goldfish, lose their teeth with age and growth. However, the goldfish is a bit more unique when it comes to losing their teeth.

Goldfish lose and regrow their teeth so quickly that they consistently have a new tooth or multiple teeth coming in at a time. This allows for general diseases that may affect other animals with teeth to be non-existent in the goldfish. This trait also allows them to grow to very large sizes if given enough room and food since they do not have to worry about losing the ability to eat as they age, as many other animals do.

Not only are the goldfish constantly regrowing fresh, new, shiny teeth. You also save money on dental products since you don’t have to make any extra stops for your goldfish!

Can Goldfish Bite With Their Teeth?

Once again, you have no need to fear when it comes to potential goldfish attacks. These teeth are designed with the purpose of grinding food into a paste, not making you into a full course meal. However, you might want to stay on your goldfish’s good side just in case.

If you were to make your goldfish mad enough, it could potentially try to bite you. However, all you would get is a funny feeling from some goldfish lips and gums attempting to take a bite out of you. Even if the teeth were close enough to hit your finger, the goldfish itself could not generate enough force to do any real harm. It would simply feel like some soft stones rubbing on your finger.

Goldfish do not pose any threat towards you in terms of biting, and if one were ever angry enough to try and make an attempt, it would be pretty disappointed with the results if it mustered up enough courage to make an attempt in the first place that is.

Goldfish are amazing pets. Between their calm personalities and iconic look, it is often easy to overlook their inner workings. Like all pets owned by humans, they are just as complex and diverse as their owners. They are accompanied by their own set of interesting facts and attributes.

Teeth are far more common in fish than we think; thankfully, the teeth found in goldfish are harmless to us humans. They are designed simply to help break down little bits of food such as detritus, vegetables, larvae, pellets, or fish flakes. These teeth will constantly be lost and regrown as the goldfish goes through its life. This natural process is crucial in making sure your goldfish stays healthy and lives a long and happy life.

Please be aware: if you plan to change your goldfish’s diet in any way, it is advisable to seek other sources of information to learn how to do this. Drastically changing any pet’s diet could have potential negative side effects if done too quickly or in the wrong way.

Armed with this new knowledge, you can love your goldfish even more now with a better understanding of it, just don’t expect it to smile for any family photos that may be coming up in the future.
If you liked this article, make sure you check out the rest of the website! And if you have any more questions you can ask them in the Q&A Section!