Goldfish are a popular freshwater fish related to carp. They originate from Asia and are considered an invasive species to North America when found in the wild. Goldfish are one of the most common species of pet fish and tend to be the poster fish for movies or advertising – Sesame Street’s Dorothy, for example. They’ve even inspired a famous line of snack crackers.

Goldfish come in a variety of sizes, shapes, and colors. Over time, you may notice that your goldfish changes some in color. To an extent, this can be natural. However, it’s more likely that your goldfish is turning black because it’s sick.

My Goldfish is Turning Black Because…?

There are a handful of reasons that could explain why your goldfish is turning black:

Goldfish come in a variety of colors. PetMD explains that the gold color variation was developed from a genetic mutation in the silver carp produced in China during the Song Dynasty. During the Song Dynasty, royalty were the only ones allowed to keep yellow goldfish while commoners kept orange goldfish.

Your goldfish may naturally be predisposed to black color variations. Over time, their color could become more vibrant, and they may appear blacker than they did as juvenile fish. It’s not uncommon to see this as goldfish grow. Some goldfish can even become a more vibrant color by eating color-enhancing goldfish food.

If your goldfish is not a variety that has black in its color variation, then suddenly developing black spots isn’t normal for your goldfish. For example, a goldfish that is a solid and vibrant orange color shouldn’t turn black.

To be sure, you’ll need to check your aquarium’s chemical levels. You can use a simple test kit or a more involved test kit. Goldfish are rather hardy and can handle chemical fluctuations a bit better than some other types of fish. However, they still need their water to be as balanced as possible.

The Goldfish Sanctuary explains that goldfish thrive in these water levels:

You can manage ammonia levels well with proper filtration systems in place, as a good filtration system will help to eliminate ammonia in the tank. You can also regularly remove uneaten food and plant decay, don’t overfeed the fish and be sure not to stock your tank with too many fish at one time.

The Indiana Department of Natural Resources explains that cysts form when the parasite penetrates the goldfish’s skin. The cyst and surrounding scales appear black, and that is how the goldfish gets black patches on its body. While black spot disease can develop on the fins, it is often more easily identifiable by black spots on the body.

While not ideal, Black Spot Disease is not as fatal to goldfish as ammonia toxicity can be.

In the same vein, your goldfish can lose pigment and turn white due to a lack of proper light exposure. This doesn’t affect the health of your goldfish, though it may not be aesthetically pleasing for you if you didn’t intend to have a black goldfish. To remedy this, you can add lighting to your aquarium or brighten up the environment.

Goldfish are already considered fairly messy fish, so overfeeding can cause a very dirty tank. You want to avoid overfeeding your goldfish and make sure your tank has proper filtration to help prevent irritation from ammonia for your goldfish.

There are chemical, biological, and mechanical methods of filtration. Resources from veterinarians are very helpful to determine the best filtration systems for your aquarium. Your goldfish may prefer one type over the other or need a combination of filtration methods in order to keep their tank clean enough.

Stressful tank environments can cause black spots to appear on your goldfish. Bullying between fish, being thrown around by the filter flow, inadequate water temperatures, etc., can create stress that turns your goldfish black.

In some cases, the black spots that appear on your goldfish could be bruises from rough encounters with other tank mates. You may need to consider removing any fish that is bullying others or being particularly rough in order to keep the larger group safe.

Because of the goldfish’s playful and curious nature, you may need to adjust some of the decors in your aquarium to be more goldfish-friendly. If any decorations are pointy or rough, your goldfish may become bruised while swimming and foraging against them.

Be sure to observe chemical levels, water temperatures, fish temperament, and any changes that have been occurring in your tank to best eliminate stress for the health and safety of your goldfish. 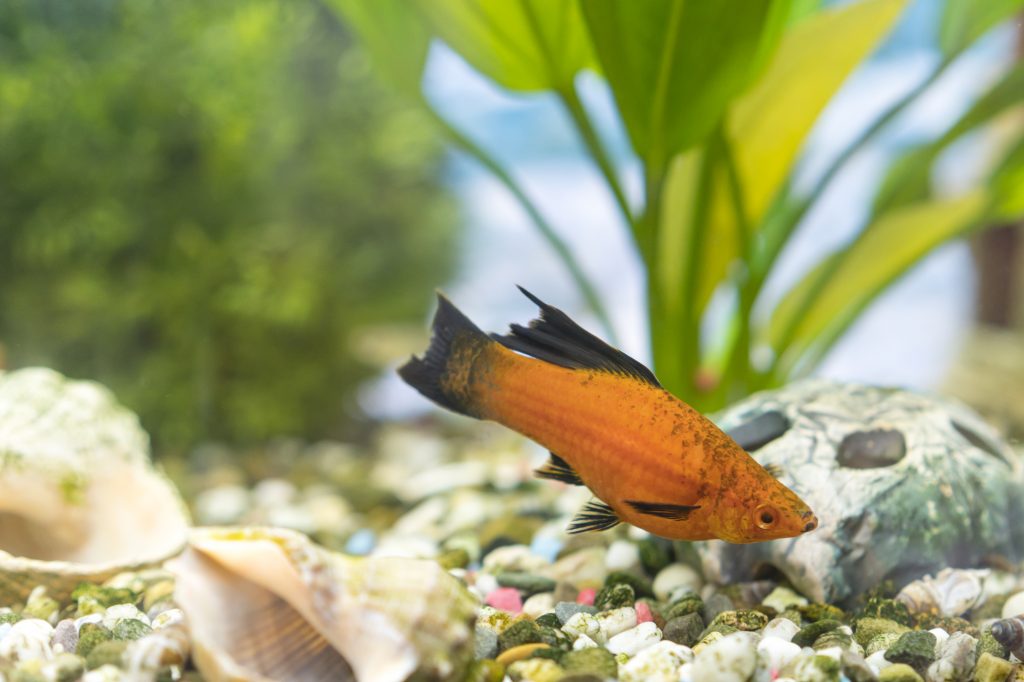 Will My Goldfish be Black Forever?

Not all color changes are permanent. If your goldfish turned black because of ammonia level, disease, a dark environment, etc., and you remedy those problems, you should see the black spots on your goldfish heal and go away.

Once you’ve remedied all of the issues that could be causing black spots on your goldfish, you’ll need to be patient. It could take several weeks for your goldfish to return to its normal color.

However, if your goldfish is turning blacker because its natural colors are changing over time, then your goldfish likely won’t revert back to its old color variation. It’s never a bad idea to seek advice from a veterinarian, especially one who specializes in aquatic care.

How to Prevent your Goldfish from Turning Black?

In order to prevent your goldfish from turning black, you need to:

All of these efforts done as preventative measures should prevent your goldfish from turning black in the first place. These tips will be trial and error as you become more experienced with your own goldfish and recognize what you need to do to keep them at their happiest and healthiest.

Some more frequently asked questions about goldfish are:

Why is My Goldfish’s Tail Turning Black?

Your goldfish’s tail turning black could simply be the color variation of your particular goldfish. However, you’ll likely have an idea if this change is abnormal or not, depending on the color of your goldfish.

Your goldfish’s tail or other fins turning black can also be beginning signs of toxic ammonia levels in your tank causing chemical burns on your goldfish. You’ll want to start by testing the water’s ammonia levels immediately to determine if the water chemical levels need to be adjusted and how to proceed.

Why Is My Goldfish’s Mouth Turning Black?

Why Do Goldfish Lose Color?

Your goldfish’s natural color variation can change over time, and that may mean losing pigmentation of some scales as they get older. However, some other culprits of goldfish losing pigment can be lack of exposure to light or poor diet. You can try exposing your goldfish to more light and feeding them a color-enhancing diet to help bring the vibrancy back to their scales. More information can be found here.