If you notice your betta fish digging in rocks then it could be a sign that something is wrong. However, it could also be a quirk of your betta and nothing to worry about.

If you want to know when you should start worrying then keep reading to find out if it’s normal behavior or something more serious.

Things That Could Be Wrong With Your Betta

There are many completely normal reasons that you might find your betta digging around the rocks in his substrate. However, before you just accept it, you should make sure that nothing is wrong with him. Here are some common problems that might cause digging.

If you notice digging the first thing you should do is check for a fungal infection or parasites. Because this digging may actually be flashing or scraping. A type of behavior where your betta tries to rub off any unwanted pests on his body.

If you notice a gold, dust like coating covering your betta’s body then he is suffering from velvet. Along with the gold coating, you may also notice scraping as mentioned earlier as well as lethargy and a lack of appetite.

Perhaps instead of noticing a golden coating, there are white spots appearing on your betta’s body. These white spots are indicative of ich. Ich is a highly contagious parasite that will quickly infect any other fish in your tank.

If you want to know more then check out this complete guide on ich.

Your betta could also be suffering from columnaris. If this is the case, then you’ll notice cotton-like growths around your bettas mouth and gills. However, more uncommonly these growths can also occur on the top of your betta as well.

Learn how to treat columnaris.

Gill flukes are another type of parasite that could end up infecting your betta. You won’t see the gill flukes themselves, but they leave tell-tale signs. If you notice scraping/rubbing, gills covered in mucus, gill damage, and your betta gasping for air, then it’s highly probable he has gill flukes.

If this seems like what your betta is suffering from then here’s what you need to know about gill flukes.

And lastly, your betta may be suffering from anchor worms. Luckily this parasite is a lot easier to spot, in fact, you’ll see them hanging off your betta. You’ll also notice ulcers, redness and soreness, difficulty breathing, and lethargy in your betta.

You can learn how to remove anchor worms in this article. 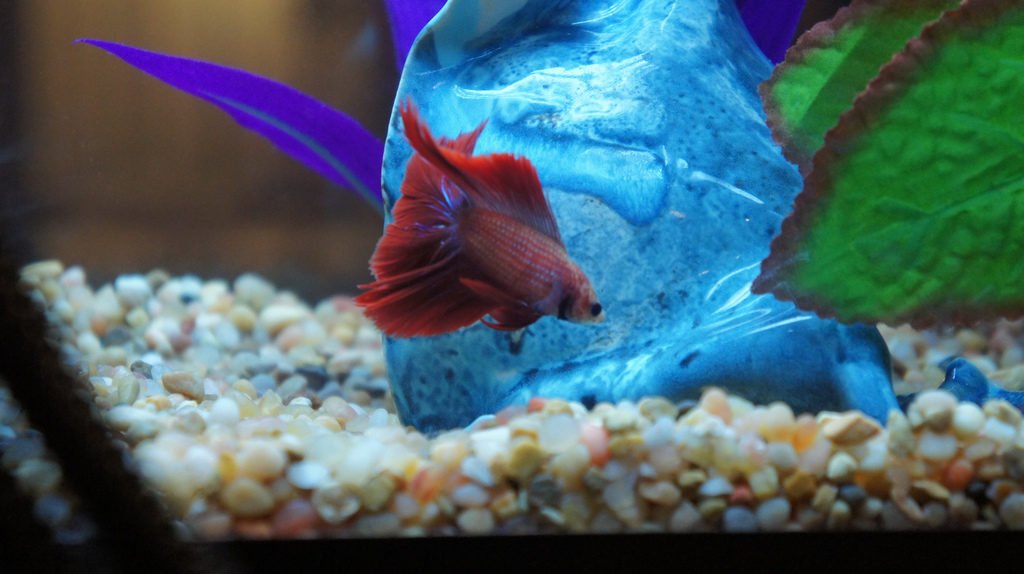 Other Causes Of A Betta Fish Digging In Rocks

Luckily, if your betta doesn’t show any signs of illness then you can stop stressing as much. However, there are other reasons that start a betta fish digging in rocks. Some of them include

Trying To Find Somewhere To Hide

If you don’t have a cave in your tank or a few places your betta can hide, then he may start digging. This digging is a sign that he’s trying to make himself feel more secure.

In fact, when I first got my betta, this was the exact behavior he exhibited. Once I added a cave and more plants the digging subsided massively.

If you notice this happening then the best solution is to add more decorations to your tank. A betta cave is a great place to start, however, there are so many decorations you can choose from! Here are some of the best decorations for bettas.

As well as decorations make sure you add lots of plants as well! My betta loves anubias, but you can also add java fern, java moss, anacharis, hornwort, and betta bulbs! (Check out all the best plants for bettas.)

And lastly, you could add a nice piece of driftwood that has a lot of nooks and crannies! (What you need to know before adding driftwood to your tank.)

If your betta doesn’t eat his food straight away then eventually it’s going to sink to the bottom of the tank. If you notice your betta digging in his tank then he may be foraging for food he can smell.

If this is the case, then at least there’s not a problem with your betta. However, you should consider vacuuming the gravel more often if you don’t already.

Seeing His Own Reflection

While this won’t affect him much short term, over time it could really begin to stress him out. Which you definitely don’t want to do. There are a lot of negative consequences that come from stress. That’s why you should know what the symptoms and causes of stress are and how to treat it.

If you think he’s seeing his own reflection then try turning his tank lights off when it’s not bright in the room. Also, you could place a lamp next to the tank and leave it on.

Something Outside The Tank Could Be Aggravating Him

Look around your tank and see if there’s anything bothering your betta. It might be something reflecting into the tank, or an item that’s particularly colorful.

Whatever it is if it starts triggering aggression in your betta he may try and do whatever he can to get to it. Including trying to dig through gravel.

If the water in your tank is too hot then your betta may be suffering from temperature shock. How erratic does the digging seem?

Here’s what you need to do if you think your betta is suffering from temperature shock.

Tank Is Too Small

Perhaps, it’s because your tank is too small. It’s not uncommon after all people are told a betta can survive in tanks that are 1 or 2 gallons in size. And this is just not enough space for them to be happy.

The minimum tank size a betta should be in is 5 gallons, but bigger is still better. If you’re housing your betta in a tank smaller than 5 gallons then this could be causing the behavior.

If you’re thinking of investing in a bigger tank then here are the best 5 gallon tanks for bettas.

It’s Just Part Of His Personality

Bettas are weird. They have unique personalities and it’s not uncommon for them to do weird things! If everything else on this list doesn’t seem to be the problem then it’s probably just his personality.

If this is the case then there’s not much you need to do, just let him get on with it. However, if you’re using rough or sharp substrate then you may want to consider something less harsh.

There are a lot of different reasons that might be causing your betta fish to start digging his gravel. Hopefully it’s just because of his personality, however, it could be something else.

Here’s a quick recap of other things it might be.

2 thoughts on “Betta Fish Digging In Rocks (Is It Normal?)”