Can betta fish live with guppies?

There is no short answer to this question. But the answer does lean closer towards YES. However, there are so many circumstances that need to be considered. Such as how aggressive or placid your betta is, how big your tank is, and what other fish you have in your tank.

With that being said, here’s a guide which will help you decide whether you should introduce guppies to your betta.

If you don’t want to read the article then why not check out the video!

Can Betta Fish Live With Guppies?

Here are a few things to consider before deciding whether to introduce guppies to your tank.

When you plan on adding different species of fish to a tank you need to make sure that they can survive in the same conditions.

Guppies come from South America and are found in rivers and lakes, whereas bettas are found in rice paddies and streams in South East Asia. On paper, it seems like they wouldn’t survive in the same conditions. But, luckily they do.

As you can see guppies and bettas are able to live in the same conditions together.

The Gender Of Your Betta & Guppies

The gender of your fish is also going to determine the likelihood that they can live together. As you know male bettas are extremely aggressive. And while female bettas aren’t as bad, that doesn’t mean they can’t be hostile. Sometimes they can be worse because they’re faster than the males.

This is the worst combination you can have in your tank. Male guppies are the ones that are brightly colored with flowing tails. Both things that trigger aggression and territorial instinct in bettas. Putting a male guppy and male betta together is going to spell trouble, and most likely result in the death of your guppies.

Female guppies look a lot duller than male guppies. So it’s a possibility that you could add them to the tank with your betta. However, if you have a female guppy that’s too colorful then the end result could also be bad. So while it’s possible to put female guppies with a male betta, caution is still advised.

Female bettas aren’t as aggressive as males, so you’d think it would be okay to put male guppies in with them. However, for the most part, you should definitely avoid this. Male guppies often mistake female bettas for guppies. And try to breed with them. Obviously, the betta won’t be pleased with this and may end up attacking your guppy.

This is the best combination of guppies and bettas you can have in your tank. While female bettas are still aggressive, they won’t be as aggressive as males. And female guppies are less likely to trigger aggression in female bettas. So if you’re desperate to house bettas and guppies together this is your best bet.

However, one thing to watch out for is that bettas may mistake a female guppy as a “sorority sister”. When this happens female bettas may bully your guppy to establish a pecking order. 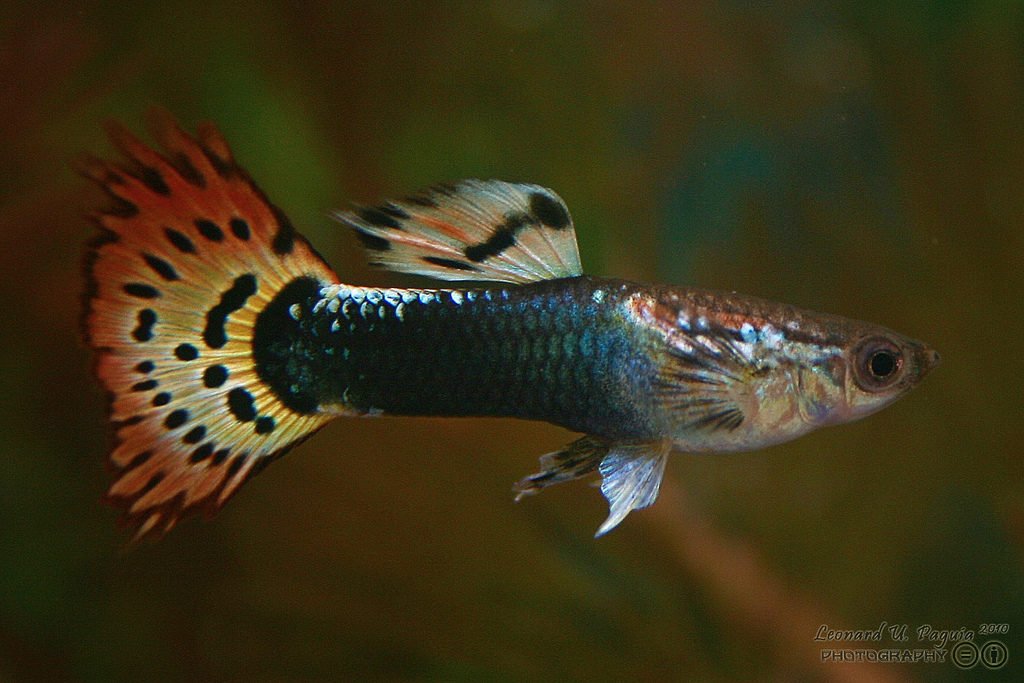 What Part Of The Tank Do Guppies Occupy?

Guppies often like to swim in the middle of the tank and around the top. This can sometimes cause problems if your guppies start swimming into your bettas territory. However, once your betta has established which area is his, it is less likely guppies will swim there (unless there’s food).

How Many Guppies Can You Keep With Your Betta?

If you plan on keeping fish with your betta it’s important that your tank is big enough to house both.

As a rule of thumb, you want to have one gallon of water for every fish in your tank. However, as you’ll also be housing a betta with your guppies you’re going to want a bit of extra room. Personally, I wouldn’t go any smaller than a 10-gallon tank that houses 1 betta and 3 guppies. And with every 5 gallons, I’d add an additional 3 guppies.

This is going to be beneficial because it will make sure your fish have plenty of room to stay out of each other’s ways.

Normally when housing guppies you should have 1 male for every 2 females. But because of the increased likelihood of aggression, try to stick to females to minimize the chance of attacks

When you add guppies to your tank you shouldn’t just worry about your betta attacking them. You should also think about whether they’re going to attack your betta.

Fin rot (A disease that eats away the fins of your fish, leading to death if not treated) is more occurrent in fish that have their fins nipped. This is due to stress and open sores.

If you’re worried that your betta is suffering from fin rot already, then the good news is that you can treat it. Check out this article to find out how to treat it, prevent it, and the other most common causes!

And remember, male guppies are territorial too, mostly within their own species. However, it’s not uncommon for them to attack and nip other species as well. Especially if they have long flowing tales and are brightly colored.

This is another reason why you should consider only adding female guppies to your tank. Aggression and territorial instinct in female guppies is extremely rare and the chances of them nipping and fighting are low.

(If you’re interested in other tank mates that can live with guppies then platies, ghost shrimp, and cherry shrimp are all great choices!)

What Do Guppies Eat?

As you know already, bettas need a variety of food to survive. On top of fish flakes or pellets, you should also be feeding them meat as well. And guppies have the same requirements. So if you plan on feeding your betta mosquito larvae, daphnia or bloodworms then your guppy will eat them too!

You don’t need to feed guppies too much either, up to three times a day is adequate. But if you wanted to keep their feeding schedule in time with your bettas, then two times a day will work too.

And just like with bettas, every once in a while it’s okay for guppies to go a day without food.

Guppies also eat algae in your tank. They won’t be able to keep your tank clean, but they will help to remove some of the buildups. (Find out what to do if green algae or brown algae are taking over your tank.)

(Check out this list of other great algae eaters for your tank!)

What To Do If Guppies Are Eating Your Bettas Food?

I previously mentioned that bettas and guppies eat the same food. The difference is while bettas NEED to have meat in their diet, it’s optional for guppies. So if you notice that your guppies are eating all the live food then you’re going to have to do something about it.

There are two methods you can try. 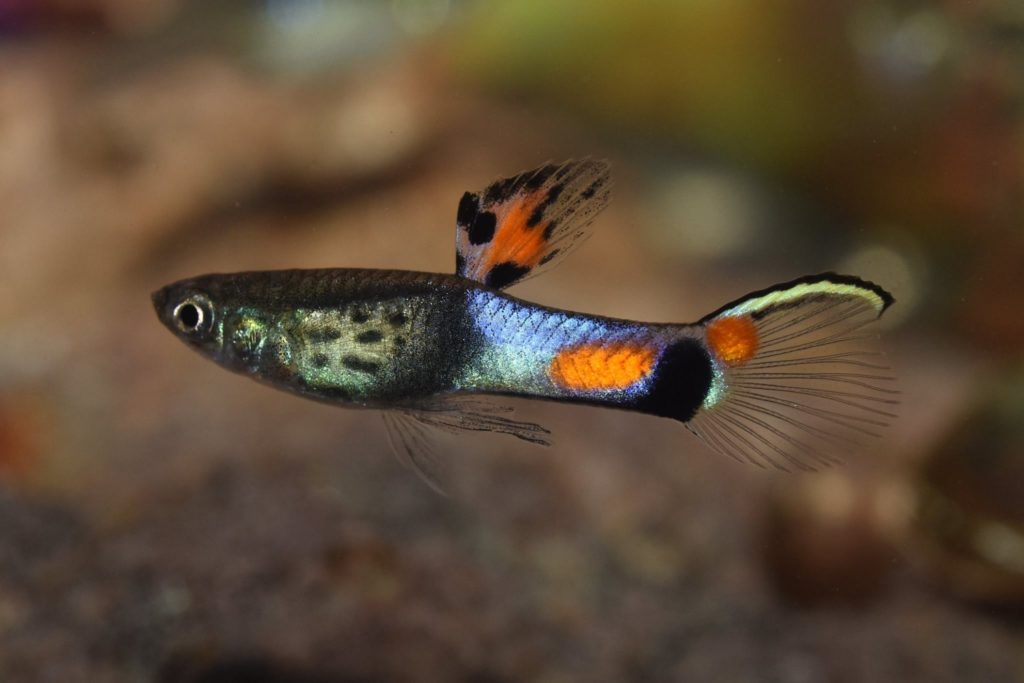 Precautions You Can Take

If you’re dead set on moving guppies in with your betta there are a few precautions that you can take. Even if you think your betta is peaceful you never know until you introduce guppies to your tank. Some of the precautions include:

Do You Have A Better Understanding?

Have you found the information on this page informative?

If so, then you should have a better understanding of when it’s acceptable to add guppies to your tank, and when to avoid them. And just to reiterate here are some of the main points.

And most importantly, there are plenty of times bettas and guppies have coexisted in tanks together. But this doesn’t mean your betta will do the same. You have to be fully prepared for any betta fish to turn on any other fish because it’s in their nature.

If you liked this article leave a comment in the description below or any questions you may have.

And remember there are so many tank mates that can live with your betta. If you’re interested then why not check out: