If your betta is suffering from Popeye the good news is the chances of you misdiagnosing it are very rare. And some more good news is that with the right care, Popeye in betta fish is completely curable! So keep reading to find out how to cure it. As well as what causes it, how to prevent it and much more!

A Complete Guide To Popeye In Betta Fish

The guide you’re about to read will be broken down into different sections. While you may be only looking to treat Popeye, it’s also important to know the causes and ways to prevent it! So you should definitely read the whole article.

Popeye is an affliction that affects all fish, not just bettas. Its scientific name is exophthalmia. But Popeye is when pressure behind the eye causes the eye to protrude. It’s a disease that’s easier to prevent rather than treat. If left untreated bettas often die, but hope isn’t lost just yet!

Unfortunately, you can’t pinpoint what causes popeye to one source. There are a whole range of causes of Popeye, and if you don’t treat the correct one then the problem is only going to get worse.

The most common causes of Popeye are:

If you notice your fish has unilateral Popeye (if your fish has only one affected eye) then it may not be an infection of any kind. In most cases, one eye swelling is caused by physical damage. This can be a result of your fish banging into something, getting into a fight with another fish or even if you’re too rough when catching him in a net.

If your betta is housed in a tank with others and only he has unilateral Popeye, then it’s almost guaranteed to be the result of physical damage.

What Are The Symptoms Of Popeye In Bettas?

If your fish is suffering from Popeye there are more than one symptom apart from the most obvious.

The most obvious symptom of Popeye is one or both eyes popping out. In fact, when you see this symptom alone you can guarantee that your betta is suffering from Popeye. As previously mentioned it can be one eye that’s popping out or both, and you’ll have to treat each case accordingly.

As well as eyes popping out, your bettas eyes may also change color. They could look cloudy or milky (this occurs when the cornea has ruptured) but it could also look bloodstained. A bloodstained eye is most commonly associated with physical aggression.

A White Ring Around The Eyes

This is something to look for early on, and if you spot it you may be able to treat Popeye before it causes your bettas eye to pop out. If you do notice a white ring around your betta’s eye then you should start treating it for Popeye

Other Signs Of Illness

Your betta will also showcase some of the typical signs of illness when his Popeye is an infection. You’ll notice a lack of energy as well as a loss of appetite. He may also seem to stay in one place more often and try to avoid other fish as well.

(If you don’t notice these symptoms in your betta, then they may be suffering from something else! Check out this article on all the diseases and illnesses your betta can end up suffering from.)

How To Cure Popeye In Betta Fish 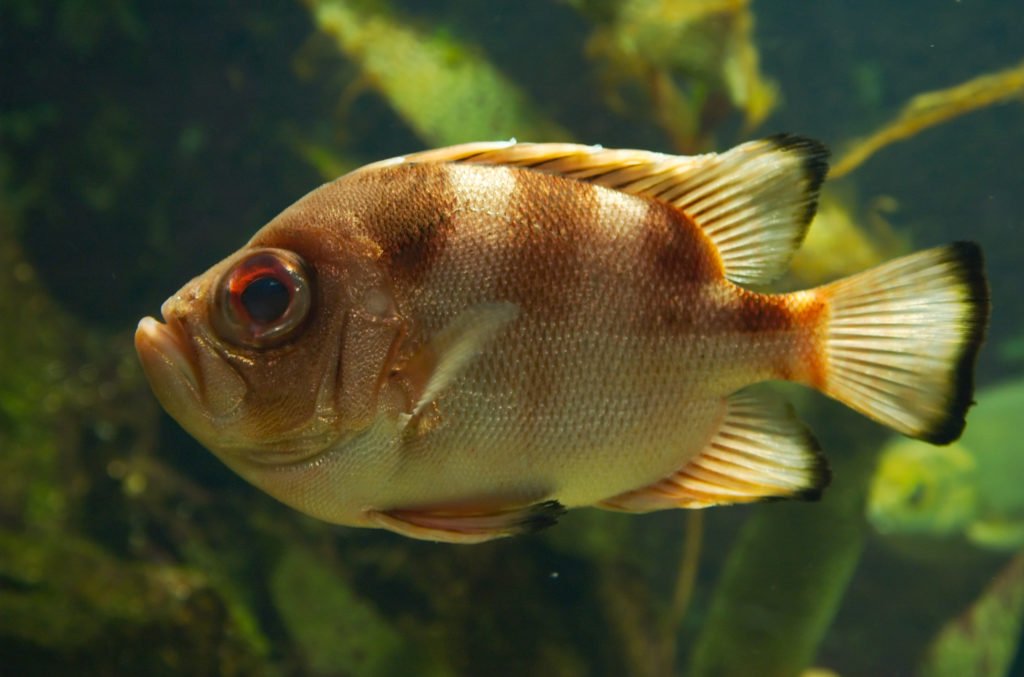 If you think that Popeye is the result of physical harm then there’s not as much you can do, unfortunately. The good news is that this kind of Popeye is less likely to be fatal because your betta isn’t in a dangerous environment. Here are the steps you should take:

Alternatively, you can also add aquarium salt to your tank which is going to improve your bettas immune system as well as helping him recover faster. If you’re adding salt you should be changing your water more often. The International Betta Congress even recommend using aquarium salt as a general tonic for ailments.

If your betta is suffering from Popeye due to infection then the method of treatment is going to be different.

How To Prevent Popeye In Bettas

The best way to stop your betta suffering from Popeye is preventing it altogether. To do this you should try to prevent the two main causes: physical damage and infection. There are a number of ways you can do this.

How To Prevent Infection

If you’re trying to prevent infection then you’re going to have to focus primarily on improving the water quality of your tank. Poor water quality is going to affect the immune system of your betta as well as stressing them out. Some of the main ways you can improve water quality are:

How To Prevent Physical Harm

You should also try to limit the amount of physical harm caused to your betta. This is easier said than done and here are some of the things you’ll need to watch out for. Can Betta Fish Die From Popeye?

If a betta has Popeye it’s quite hard for them to die from the ailment alone. In fact, it’s not uncommon for eyes to become so damaged that they rot off and the betta still survives. If this does happen it can be harder to feed them, but in general they can still live.

But what bettas will die from is the conditions that cause Popeye. If your betta is in bad water and already has Popeye then it’s likely to get other illnesses as well.

Infections that cause dropsy, which is almost always fatal, are more likely to infect your fish as well. (If you don’t know about dropsy then you should definitely learn about how to treat it, spot it, and prevent it!)

So while Popeye itself is quite unlikely to kill your betta, the infections that follow if nothing is done aren’t.

Just to recap, the good news is that if your betta has Popeye then he still has a good fighting chance. But you are going to have to make some changes to make sure he lives. Here are the most important things to remember.

If you have more questions then you can leave them below. Otherwise, you should check out more articles on different betta illnesses. Such as: