Angelfish are a specific type of Cichlid that comes from the Amazon River in South America.  They’re beautiful, graceful and active fish with silver bodies and black stripes.  Selective breeding has produced an array of colors and markings.

But, because they’re a Cichlid, they share the same aggressive characteristics as the rest of those in their genus.  They are fun to keep but there are many cautions involved.  The most important thing is to understand the patterns.

Although mostly considered to be very peaceful, Angelfish will show aggression.  They’re active, feisty and territorial, which is what makes them difficult to house with other fish.

Do Angelfish Fight Each Other?

Angelfish will fight each other.  This will be prevalent when there’s more than one male in the tank.  But it’s not unheard of for females to attack each other when there are too many of them.  This is a natural behavior for them. 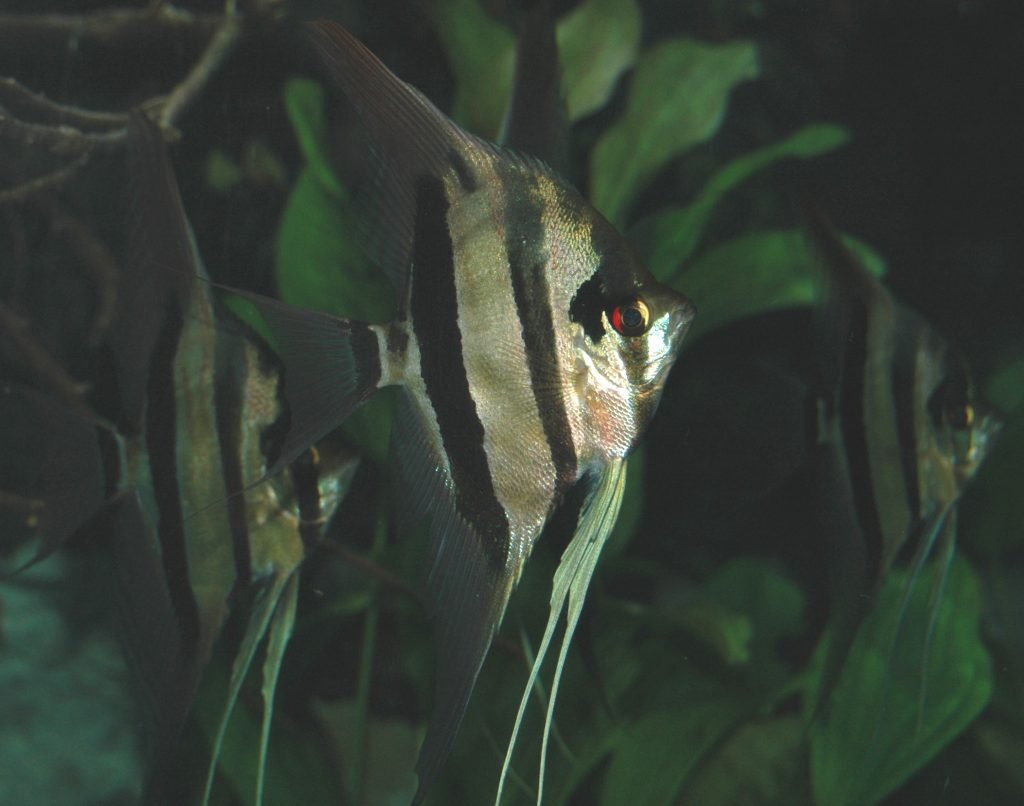 What Causes Aggression in Angelfish?

Because of their territorial natures, aggression is a part of an Angelfish’s characteristics.  This is how they communicate and establish hierarchy among other Angelfish in the tank.  So, there doesn’t have to be a cause per se, but sometimes their aggression can have a reason.

If you change to water too often, it upsets the social order.  This means Angelfishes have to re-establish their position after every replacement to create a chemical signature.  When you change the water, it nullifies the pecking order.  New water means new and more aggressive power battles.

If there is another fish in the tank that equals the aggression of an Angelfish, this will cause and uptick in competition and fighting.  This is why Angelfish should be the only dominant fish in a community tank.

If Angelfish aren’t getting enough to eat, they will eat other fish in the tank.  This means they’ll be aggressive and they aren’t picky about the food they eat.

During reproduction, Angelfish will chase each other before and after mating.  You’ll know it because they’ll flick their fins to look bigger and lock lips while nipping and chasing each other.  Females will exhibit aggressive behavior when they’re getting ready to lay eggs.

Because Angelfish can grow up to 10 inches, they need plenty of room to move about.  Anything less than 10 gallons isn’t good for one Angelfish.  The same is true for less than 30 gallons and two Angelfish.  If they feel cramped, they will become aggressive.

Shape and size plays an important role here.  A tank should be tall rather than wide with plenty of hiding spaces.

(Find out the ideal pH levels for your angelfish!)

What Are the Signs of Aggression Occurring?

Because the aggression of Angelfish is a normal occurrence, it’s difficult to tell whether they’re fighting or trying to spawn.  Both behaviors look very similar in form.

Male and female Angelfishes have similar mating behaviors with some minute differences.  They will chase, nip and lock lips with each other.  When they lock lips, they’ll twist around.

The male and female decide on a place within the tank to lie the eggs and they begin cleaning the spot to prepare it.  Chasing then ensues.  The female will lay her eggs in a straight line in the selected area followed closely by the male, who fertilizes them.

Females will become aggressive during the period of egg development in their papilla.  You’ll know because their belly looks bigger.

The main cause of aggression in Angelfish is for territory and to establish dominance.  Regardless of gender, if there are too many of the same sex, aggressive behavior becomes tantamount.  Especially if there are too many males, they will try to kill each other for mating rights and to be the alpha.

Even if they’re mating, they will become territorial with one another because they don’t want their private space invaded.  Indicators that they’re fighting with other fish will include hitting with their tails, chasing, nipping and staring.

So, it’s a strange balance.  It’s a good idea to have more than one but not more than six.  The good news is that the fights are very brief and not frequent.  But, if there’s concern about their aggression, they have to undergo consistent observation to keep it under control

As you can see, it’s easy to confuse mating with fighting because the aggression looks similar.  And, obviously, you don’t want your Angelfish hurting each other.  So, the best way to tell the difference between the two is to monitor the behavior for long periods of time.

Also, you should understand what the sex is of your fish.  This can be difficult because the males and females look alike and they both have papilla.  Females will be less territorial and have a papilla where they keep their eggs.  The male’s papilla will be pointier and you can only see it when he’s preparing to fertilize eggs.

(Find out whether angelfish and gouramis can live together!)

How Can You Stop Angelfish Acting Aggressive?

You can slow down aggressiveness, but you will not be able to stop it entirely.  This is because aggression is part of their nature, they have to behave that way.  Their design and temperament lend itself to this.  However, there are some things you can attempt and keep in mind.

If you have an overly aggressive male, you have to place him in a different tank.  It could be that he’s just very dominant, but there could be other reasons too.  So, keep him away from all other fish until you can figure out why he’s acting up.

Don’t change the water often.  It’s not a surefire solution, but it does increase the possibility for peace in the aquarium.  Of course, you don’t want a dirty tank because that will also cause an Angelfish to be aggressive.

Making sure your water parameters are at peak ranges will ensure your Angelfishes are happy, which reduces unnecessary aggression.  Not only should they have a good temperature but also a minimum water current.  A strong water flow will stress them out and it often results in aggressive behavior.

In the event you notice there are two Angelfish getting ready to spawn, put them in their own tank.  This way they won’t feel threatened by other fish in the vicinity and they can do their thing in peace.

If you provide enough nourishment and give your Angelfish tender loving care, they can be less aggressive because they’re happy and thriving.  They won’t feel a need to bully other fish.

If you want more than one Angelfish, it’s best to put them all in the tank at the same time when they’re young.  This way they can establish hierarchy and develop their group.

But, if you already have an Angelfish and want to add another, it’s best to remove the current fish from the tank.  Put it in its own space for a few days.  During this time, you can clean the tank, rearrange the decorations and add the new Angelfish.  Once the newbie becomes established, then add the separated Angelfish.

Monitor the Angelfish to see how they get along.  See which one becomes more aggressive or if one exhibits signs of being overly aggressive.  You may have to remove fish and reintroduce them several times before they acclimate to one another.

Make sure the aquarium has plenty of tall plants, caves, rocks, glass, driftwood, and other hiding areas.  This way each Angelfish can claim its own section.  This will reduce territorial bullying and fighting.  Try to mimic their native habitat as much as possible.

Have a Big Enough Aquarium

Adult Angelfish will get cramped in smaller spaces and will exhibit violent aggression that can lead to the death of other fish.  Even a 90-gallon tank won’t be big enough for two males fighting for mating rights and territory.  For one Angelfish, it is advisable to have a 20-gallon tank or larger.  For two Angelfish, you want at least a 50-gallon tank.

(Find out more about the different types of cichlid.) 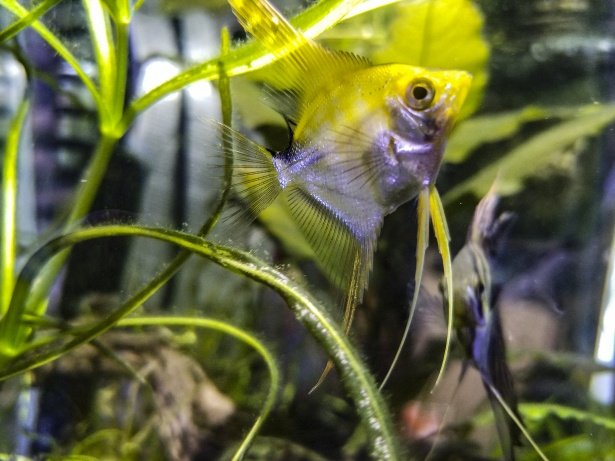 Do Angelfish Eat Other Fish?

Yes, Angelfish will eat other fish smaller than themselves in the tank.  This will be especially true if they’re hungry and their diet is inadequate.

Yes, Angelfish will bite humans.  They do this when they feel threatened or because the human is disturbing their breeding area.

Angelfish are gorgeous but they are very aggressive.  It’s in their nature to be this way.  So, it’s important to understand their behavior patterns in this regard.  You’ll be able to understand what’s happening and how to handle it.  When you give them the best care possible, their tendency toward aggression will reduce somewhat.