Do betta fish get lonely? When you see your betta swimming around on his own you may be wondering whether he’s lonely or not. In fact, sometimes you can look into the tank and you can swear that his mouth is a little more upturned than usual and he really is lonely.

Keep reading to find out if bettas get lonely, and the things you can do to make him happier!

Do Betta Fish Get Lonely?

While no one can truly answer the question “do betta fish get lonely?” The answer is most probably no. Unfortunately, bettas are known to be solitary fish, and if you’ve had a few then you may already know that. In some cases, adding any other animal to your tank often proves fatal or seriously damaging.

However, that doesn’t mean a betta fish can’t get sad. In fact, it’s very common for bettas to become stressed, depressed and bored!

And as long as your betta has the things he needs in his tanks such as plants, hiding places, shade, and plenty of stimuli, then he’s going to be happy!

Do Betta Fish Prefer Being Alone?

Just because bettas are solitary fish doesn’t mean they necessarily mind being alone. It really depends on the temperament of your betta.

In some cases, having anything even a snail in the tank will make your betta territorial. While in other cases, a betta may come out of his shell more when he’s in a community tank!

However, one thing is for certain, you should never keep a male betta with another male betta. This is the worst thing you can ever do, and if it happens one of them will end up killing the other one.

The company of other tank mates may make your betta happier though. Shrimp, snails, platies, mollies and certain catfish all make great choices! Your betta will be happier, because other fish swimming around may make him feel safer.

Just like many hiding places means that your betta will want to be out in the open more, a lot of fish swimming around will show him there’s nothing to be afraid of! Just make sure you’re buying the right fish.

Keeping Bettas With Other Fish

If you plan on keeping your betta with other fish there are a few things you’ll need to remember.

Make Sure The Tank Is Big Enough

Provide Lots Of Places To Hide

As well as making sure the tank is big enough, you should also make sure that you’re providing enough hiding places for your betta, and all the other fish.

Having lots of hiding places is going to make all the fish in your tank feel safe. And like I previously mentioned, the safer your fish feel, the more likely they are to swim around in the open.

Keep An Eye On The Tank

When you first introduce your betta to new fish it’s very important to make sure you’re keeping an eye on the tank as often as you can.

Not only will you be able to see if your betta is bullying other fish, but you’ll also be able to check they aren’t bullying him. If you do notice fish are bullying each other, then you may need to buy a new tank or use a tank divider to separate them.

And obviously, it goes without saying, make sure you’re choosing his tankmates carefully. It’s not just bright colors and long flowing tails that you should be avoiding.

On top of this, you should try to avoid any fish that spend time near the top of the tank. This is where your betta will often swim, and if he thinks another fish is entering his territory he may attack them. 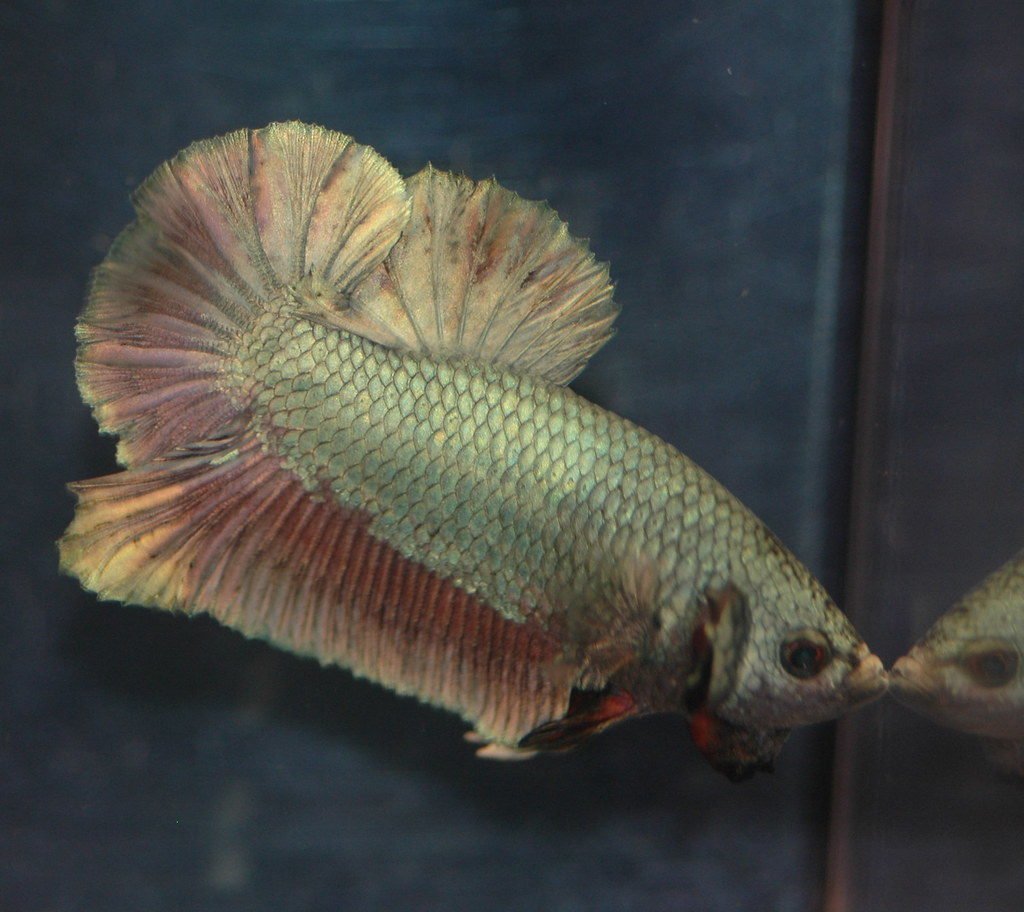 Do Female Betta Fish Get Lonely?

You know male bettas can’t live together, but what about females? While you can keep females on their own you can also keep them in a sorority if your tank is big enough.

A sorority is a group of female bettas that live together. While they all have their own unique territories, they can cohabitate peacefully, and don’t mind other fish entering their territory.

But while aggression does still occur and a pecking order will often be found out, it is a lot more likely that a female betta will get lonely.

Once again if you’re planning to keep female bettas together then you should make sure you’re housing them in a big enough tank (at least 29 gallons), giving them lots of places to hide, and be prepared to separate them if they start being aggressive towards each other!

If you are going to start a female sorority then you should make sure that you’re introducing them to tank one at a time. If you introduce them all at once, not only will it cause havoc on the ammonia cycle, but if there’s a problem with all of them, then you’re going to have to arrange a lot of moving around.

However, if you only add one at a time, then if something isn’t right, you only need to worry about moving one.

And remember, female bettas can be aggressive too, and oftentimes it can be worse than a male. Because they have smaller fins, they can swim faster and can mercilessly attack other fish. So that’s something you should bear in mind.

One thing you can do to simulate other fish in the tank is using a mirror. Believe it or not, showing your betta his reflection is actually beneficial.

He’ll flex his muscles and get some well-needed exercise, and once you remove the mirror he’s going to feel like he “won” the fight.

The other benefit of using a mirror is that your betta won’t think he’s alone. He’ll think there’s another fish swimming around somewhere and he’ll be a patrolling his tank more.

And if he’s patrolling his tank then he’s not going to be lonely!

Here’s everything you need to know about using a mirror with your betta.

Do Betta Fish Get Lonely? – Recap

So to answer your question betta fish don’t get lonely in the way you think. However, that doesn’t mean you should leave them alone. If your betta has the right temperament then it can be beneficial for their health to add them to a community tank.

And if you do plan on adding your betta to a community tank make sure that you’re adding tank mates which aren’t going to cause your betta to become aggressive. (No bright colors, no flowing tails).

And lastly, female bettas are also going to enjoy the company of other fish more than being on their own. However, if you have a particularly aggressive female betta then you will need to keep her on her own.